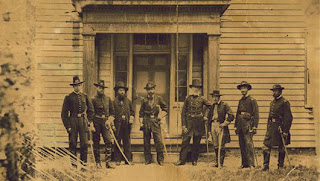 Since today is Veteran's Day in the U.S., I think it's very appropriate to talk about the many soldiers who gave their lives in service to their country. But these men who died in far-away lands, and some right here in our own country during The Civil War...what happens to them after their sacrifice is over?

In this post, guest author Diana Copland talks about ghosts, Gettysburg and her new book, A Reason to Believe (which I reviewed last week: A+) and how they all tie into one another. Add in the fact, the Steven Spielberg movie, Lincoln comes out this Friday, it seems a perfect time to talk about the ghosts of Gettysburg.

ADDED: Ms. Copland is giving away another book, Beautiful Forever. If you like vampires, leave your name and email address in a comment to put yourself in the running!

Why A Ghost Story?
Diana Copland

One question I get asked about A Reason to Believe is, “why a ghost story?”  Not “why gay romance”, (people who know me know my commitment to writing M/M romance goes back at least a decade), or why a murder mystery. More often than not, it’s “why a medium who talks to ghosts?”
There’s a simple answer; I believe in ghosts. Ghosts have never been a stretch because I’ve believed for as long as I can remember. I had an aunt who ‘talked to dead people.’ But I think the belief was solidified during a family trip to Gettysburg, Pennsylvania.
My brother is a retired brigadier general, and a civil war buff. Not a re-enactor; he went to the war college, and they studied the battle plans and strategies of both sides, leaving him with a wealth of knowledge. But for those folks that dress up in period clothing and camp on the battlefields, I understand the motivation. Gettysburg seems a place somehow trapped in time.  The cars full of tourists in Bermuda shorts seem more out of place than the men in their dusty greys and the women in hoop skirts.

It was Memorial Day weekend, and we were going from site to site chronologically; the battle took place over three days, beginning outside of town, moving through the small village and to the farmlands around it. We stopped near the Virginia monument, at the spot where Pickett’s fateful charge originated and walked to a copse of trees that line the huge, open field.  My brother was pointing to a spot in the distance, where there was a low rock wall and several trees. He told us it was where the Union lines were located, and then to a ridge above, where the cannon had been placed. We were standing where the Confederate troops had gathered.
I felt a sinking in my stomach. The only trees, the only cover between the location of the cannon and us were the trees at our backs. Seven thousand men died on that field on July 3, 1863, and there had been absolutely nowhere they could even hide. They had to know before they stepped off they were being sent to slaughter.
Philosophically, I get how horrible it is. I mean, they’re still pulling human DNA out of the field. But my reaction was visceral, and frightening. For the first time in my life, I understood the biblical reference of tearing at your hair and clothes in grief.  It was awful and painful and just so overwhelmingly sad, and it was all I could do not to lay down and cry.  It felt like collective grief, like I was feeling pain that had nothing to do with my own emotions, but belonged to someone else, several someone else’s. It didn’t dawn on me until we got back in the car and moved on, and the feeling faded, that I had experienced something that had absolutely nothing to do with me.
That in itself was odd enough. It wasn’t until we got back to my brother’s, and I was talking to my two children, that we all realized we’d had inexplicable experiences in completely different places, all on the battlefield. My daughter walked a short distance into the woods behind the Peace Light Memorial, and heard the sound of horse tack jing ling and men shouting in a location she had no previous knowledge was a forming area for a cavalry charge. My son got out of the car, and it was as if he’d abruptly gone deaf. Terrified, he realized he couldn’t hear anything; not the cars driving by or the rest of us talking. Later, we found out many of the soldiers who fought there, in a place called The Bloody Wheatfield, went at least temporarily deaf as a result of the cannons almost constant roar. His experience left him so shaken he refuses to return to Gettysburg. Ever.
My daughter and I, both fascinated by what happened, went back two years later and spent a week in the small town. If you’ve never been, I can’t recommend it highly enough. They’ve done a magnificent job of preserving history in Gettysburg; the buildings along Baltimore Street that stood at the time of the battle have brass designation plaques on the front, and many of them still have bullet holes in exterior walls.
If you take the ‘Ghosts of Gettysburg’ walking tour, you can see the battle scars while a guide in period clothes tells you about the most famous of the many hauntings. You can go into the house where Jenny Wade, the only civilian who died during the battle, was killed.  There’s a hole in the door made by the bullet that struck her in the back, killing her while she baked bread. There is an undeniable sense of eeriness in the basement of the Wade house, where her body was stored before her burial, and you’ll hear the heartbreaking story of how she and her childhood sweetheart died within hours of each other on the same day. The tours ranked up there with our most enjoyable experiences. We had others while touring the battlefields on our own that were even more memorable.
I’d always thought the paranormal was interesting, but my trips to Gettysburg were the catalyst for what I write now. I don’t like horror films, or ghosts of the Paranormal Activity variety, but I’m fascinated by the concept that the soul can survive death. I love Ghost Hunters on Syfy, and watching medium John Edwards. The medium in A Reason to Believe, Kiernan Fitzpatrick, is a cute, male, gay nod to my very Irish Aunt Millie, with a touch of Edwards tossed in on the side. And I think Matthew Bennett, my stoic, skeptical detective, is a nod to every disbeliever I’ve ever known.
After all, as Matt finds out, it’s pretty easy to scoff at the existence of ghosts – until you’ve seen one.

Diana Copland began writing in the seventh grade, when she shamelessly combined elements of Jane Eyre and Dark Shadows to produce an overwrought Gothic tale that earned her an A- in creative writing, thanks entirely to the generosity of her teacher. She wrote for pure enjoyment for the next three decades before discovering LiveJournal and a wonderful group of supportive fanfiction writers, who after gifting her with a "Best New Author" Award encouraged her to try her hand at original gay fiction.

Born and raised in southern California, Diana moved to the Pacific Northwest after losing a beloved spouse to AIDS in 1995. She lives in eastern Washington near her two wonderful adult children and her surprisingly supportive parents.