The game is Marry, Shag, or Kill/Cliff. If you haven’t heard of it before, you pick a character that you would marry (steady job, handy around the house, doesn’t leave the toilet seat up, etc), a hero you would shag (not talking about carpet, dudes), and the character you would toss over a cliff. Then climb down said cliff to drag the corpse back up and toss him over again. Well, maybe not that last part, but whatever, you get what I mean.

Looking at my backlist, which of my heroes would I marry? That’s hard for me to decide. David in Collared has a nice job. CEO. La dee dah. Any financial woes would be over, right? Except in that world, Connor would’ve been doing most (if not all) of the housework and while I might enjoy cooking...no. Cal in I Omega is a CEO too, but oh hell no. I’m going to have to go with Zachary from In the Red. He’s no CEO, but he’s steady, nurturing, protective and he actually touched a dirty dish in that book. Be still my heart. My hero! 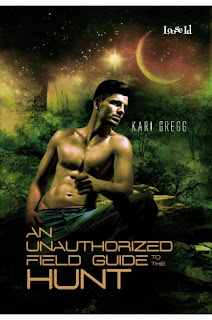 Shag? I guess all of them wouldn’t be a good answer. If I’m not in lust with those heroes, logical that my readers wouldn’t be either so it’s very true that every single one of my characters turn my crank for one reason or another . Or many others. The right hero has to be smexy, of course. RAWR! But also capable. Smart. Adaptable. And for that, it’s got to be Shane from the pornocats. Er...I mean An Unauthorized Field Guide to the Hunt, my new one this week at Loose Id. That man has got it going on, the whole package. He shows great survival skills in the first chapter of that story and if you make it through chapter two without wanting to jump him (or jumping on your Significant Other), you’re a stronger woman than me. Woo boy.

Funnily enough, which of my heroes I’d toss over a cliff is easy – Cal in I Omega. Don’t get me wrong. I love him. I love all my characters, warts and all. I like flawed characters, but some of my characters go above and beyond the call of duty. Cal basically rules that field. He’s strong, confident, a good leader for his pack, and an aggressive lover. But he’s also a jerk. The man does not talk to Gabriel and leaves him to flounder to find his way. JERK. He’s perfect for Gabriel, mind, but I’m about as submissive as a lobbed brick. No, no, no. Off the cliff you go, buh bye.

So...Now it’s YOUR turn! To celebrate the release of An Unauthorized Field Guide to the Hunt (*ahem*...pornocats...*cough*), this contest’s for you. Marry, Shag, and Cliff – which of the heroes from my backlist would you choose for each?

Leave a comment below with your email and your answers for who you’d marry, shag or cliff to be entered into a random drawing for a $10 Amazon gift card. And thanks for playing along!

Blurb from An Unauthorized Field Guide to the Hunt:

Narone native and former heir of Class II shipbuilder Denbo-West Industries, Shane West surrendered his perilous birthright to compete in the Hunt and tried his luck with the lusty cats of Mariket. Shane's mastery of survival craft in the untamed forest made him an early favorite among gamblers, fans, and arena officials. When he lured a cat into an arousing chase the first night, mating with Lore to become the season's first victor seemed guaranteed.

Then news from Arena 4 slowed to a trickle. Rumors emerged about cats who'd gone feral as well as shocking breaches in security. Unconfirmed reports of assassins and rogue predators circulated before offworld communications screeched to a halt.

In this unprecedented glimpse inside the arena, Shane peels back the veil of secrecy. What does it take to tempt a sexy cat? How does being marked as prey by a feline lover feel? Experience the wanton pleasures of the heat with Shane and his mysterious mate--and discover which of last season's scandalous rumors are true.

Welcome to the Hunt.