Review: A Shadow of Wings by Linda Gayle 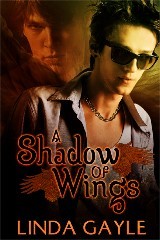 Thrown out on the street by his homophobic stepfather, Dylan struggles to get his life together. Years of being used and abused have left him tough and determined to make it on his own. When he sees a dog getting beaten, his protective instincts drive him to rescue her. But as the attackers turn on Dylan, out of the shadows comes a hero. One with mysterious eyes and a shy sensuality Dylan can’t resist.

Cam Coburn can’t reveal his true identity to the man he rescues. Nor can he reveal that he’s a freak among freaks, a cockatrice shifter with an unwanted gift for seeking out conflict rather than treasure. Newly independent from his mentor, Cam sees in Dylan his first chance to test the limits of his human guise. Defying every rule, Cam succumbs to Dylan’s seduction for just one night. But Cam finds he can’t let his lover go, and Dylan breaks down every barrier. For he is the one human who can gaze in a cockatrice’s eyes without fear.

Yet even as their bond deepens, danger closes in on them from all sides, and Cam’s dark secrets may save them—or lead to their destruction.

Quite frequently, I check the Amazon Top 100 Gay Books for paranormal-type novels by new authors. As I’ll explain next month in a post on Jessewave, “Why I Love Shifters," I need to read at least one paranormal book a week or I go into withdrawal.

So, imagine my surprise when a new shifter book knocks my socks off! A Shadow of Wings starts out as your typical shifter novel but quickly morphs into a deeply emotional against-all-odds love story that touched me on many levels. Dylan has had a rough life. Thrown out of his house for being gay, he turns to selling himself to survive, add in one bad boyfriend, a drug habit and it’s a wonder he’s still alive. However, he’s gotten himself clean and is working at a vet’s office cleaning animal cages when he’s attacked, then saved by the mysterious Cam. Yes, yes, we’ve all read this scenario before in m/m romance books, but the difference is Cam. He’s not just any guy, nor a guy who happens to be a shifter. His whole life has been lived in the shadows, never growing close to anyone and when Dylan breaks down those walls, Cam opens up into this beautiful character, who just happens to be a cockatrice shifter.

Yep, you read that right. A cockatrice shifter. No werewolves to be seen in this book! Enter in some amazing world building; namely a secret order of blind priests who have been procreating this species to fight evil for centuries, bad guys who are weasels, and a very interesting twist to the plot that I saw coming, but still surprised me because it was so cool and you have read it to believe it! The unusual twist fit perfectly into the plot because it explained so much of the history of the cockatrice in the world.

But what I loved most was Cam and Dylan’s relationship. Dylan is no fragile flower and when he finds out Cam’s true nature, he’s grossed out, yet turned on. Dylan is a gem. He’s no damsel who needs saving and I think it is his unrelenting nature that drives the plot and love story.

Since I read so many paranormal books, it takes a lot to surprise me and A Shadow of Wings did just that. It is my favorite paranormal m/m book I’ve read so far this year. Ms. Gayle’s writing style is crisp, original and sensual. I am very excited about this series and cannot wait for book two.


Originally posted at Reviews by Jessewave
Posted by Lasha at 5:30 AM