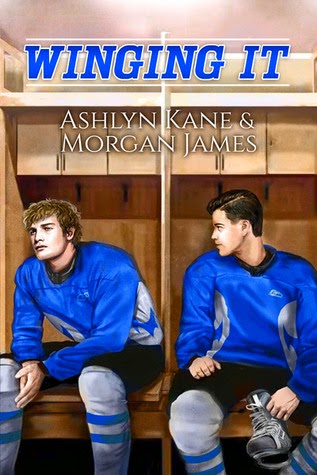 Gabe Martin has a simple life plan: get into the NHL and win the Stanley Cup. It doesn’t include being the first out hockey player or, worse, getting involved with one of his teammates. But things change.

Dante Baltierra is Gabe’s polar opposite—careless, reckless… shameless. But his dedication to the sport is impressive, and Gabe can overlook a lot of young-and-stupid in the name of great hockey. And Dante has a superlative ass in a sport filled with superlative asses.

Before Gabe can figure out how to deal, a tabloid throws him out of his comfortable closet into a brand-new world. Amid the emotional turmoil of invasive questions, nasty speculation, and on- and off-ice homophobia, his game suffers.

Surprisingly, it’s Dante who drags him out of it—and then drags him into something else. Nothing good can come of secretly sleeping with a teammate, especially one Gabe has feelings for. But with their captain out with an injury, a rookie in perpetual need of a hug, and the race to make the playoffs for the first time since 1995, Gabe has a lot on his plate.

He can’t be blamed for forgetting that nothing stays secret forever.

I love sports-themed M/M books and the blurb made Winging It seem right up my alley. Turns out I was right. Winging It is an awesome read. It has many tropes readers will enjoy: friends into lovers, coming out and some very hot first time, the-boy-is-a-virgin sex scenes.

The story is mostly told from Gabe's POV.  The star hockey player is gay and in the closet. He has a crush on his younger teammate, Dante Baltierra. Now, Dante has never been attracted to men before and so their romantic relationship progresses slowly, which really gives credence to the Gay For You theme. So, when Gabe and Dante finally hook up...woah, it is totally worth the wait! And the best part of this book for me? These characters act like guys. Guys who are typical jocks, have trouble expressing their emotions, but in the end discover love and how to work through their complex -- and now public -- relationship.

Overall, while the pacing in the beginning of the book dragged a bit, the middle grabbed my interest, so much that I was upset I had to put the book away and go to work! If you love hockey, the GFY trope and a terrific coming out tale, you will love Winging It. Recommended!


a Rafflecopter giveaway
Posted by Lasha at 4:30 AM