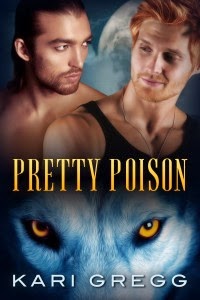 Noah fell from an eighth story balcony as a toddler, cracking open his skull and shattering his body. The accident would’ve killed a human, but even shifter blood can’t heal some damage. After the pack recommended a mercy killing, Noah’s family ran. But there’s no outrunning the mating pact formed before Noah’s birth.

Wade, the new alpha, chooses an adult Noah to fulfill the pact. Wade believes the previous alpha was a fool to reject Noah as a weak and inferior wolf, but Noah’s family was wrong to hide him and starve his wolf, too. Human doctors with human medicines are poison to shifter physiology. Now that Noah is fully grown, halting his shift to retain the pins, plates, and bars holding him together hurts rather than helps him, and for Wade, more than Noah’s recovery is at stake.

Noah’s family sacrificed everything to keep him alive. Noah will do whatever it takes to save them—including mate with the alpha who is determined to correct past mistakes and defeat old prejudices contaminating the shifter community.

Too bad some still believe Noah is the true poison…and should be culled from the pack for good.

There are two things I can expect from a Kari Gregg novel: hot sex and various characters who have ulterior motives. That is exactly what you get in Pretty Poison, Gregg’s newest shifter book. The reader is introduced to Noah, a disabled shifter who lives with his family on the outskirts of a pack. Enter Wade, the pack’s Alpha who comes to Noah’s family and demands they honor a contract of marriage made years before. Since Noah’s sister ran off and married a human, Wade picks from the remaining brothers for his “bride.” And to everyone’s surprise he chooses Noah as his mate. Noah’s not happy but goes along with the proposal because if he refuses Wade could have his entire family killed. What ensues is a turbulent and rather sweet love story as Noah and Wade learn to love each other and made changes to their pack.

Since I read about 90% paranormal books these days, it takes a really good shifter book to make me sit up and take notice. What I loved about Pretty Poison was that we finally get a disabled shifter character, whose serious injuries do not automatically heal. Noah walks with crutches and his disability has made him a liability to his old pack, they even suggested a “mercy” killing, which is why the family removed themselves from that pack. Any type of disabilities are rare in M/M books, more especially more rare in paranormal books. I thought the author handled Noah’s limitations and his eventual semi-recovery in a very unique manner.

The second best thing about Pretty Poison is the scorching hot sex scenes. K.A. Mitchell, look out for Ms. Gregg! Wow. Wade and Noah burn up the sheets and cement their bond their many, many sexy scenes. Those readers looking for a “is-it-hot-in-here?” novel will not be disappointed.

The third item I enjoyed were the secondary characters. We have strong female characters, a great beta character and the dynamic of the pack is explored very well in my opinion. My only complaint and why I did not give this 5 stars was I felt there should have been one more extra scene between Noah and Wade — like a date — that didn’t involve sex. There were some very sweet moments between the two men, but I felt more would have rounded out the book.

Overall, I really enjoyed this book and recommend it all the paranormal fans out there. It has something different that I think most M/M readers would like.

Originally posted at Reviews by Jessewave