Today we'd like to welcome JL Merrow to the site. She's been a great friend to Lasha's Paranormal M/M Reviews, so we are really excited about her new book, Trick of Time, an amazing time travel love story.

To celebrate her new release, she is offering up any book from her back list as a gift to one lucky winner! Please comment, ANSWER THE QUESTION BELOW and leave your name and email address to be entered.

Ever since authors first started writing about time travel, people have been intrigued by the idea of possibly changing history—and with it, our present. There are various theories of time, of course. I’ve always been fond of Terry Pratchett’s Trousers of Time idea, where a single change can send you scurrying off down a different leg of history and into an alternate (and possibly sock-shaped) universe. 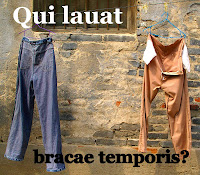 This, of course, is something best avoided by the average chrononaut, for obvious reasons:

“The tiniest little actions can have huge consequences. You might… tread on an ant now and it might entirely prevent someone from being born in the future!”
“Really?” said Ridcully.
“Yes, sir!”
Ridcully brightened up. “That’s not a bad wheeze. There’s one or two people history could do without. Any idea how we can find the right ants?”
Extract from The Last Continent
By Terry Pratchett

Which leads to something of a problem for romance authors. Because to get your heroes from different times to have their happy ever after, either our modern-day man has to relocate to the past, or his old-fashioned lover boy must move to the present. This can’t be done without consequences to the past, either way. It’s not for nothing the Terminator was sent back in time to wipe out John Connor’s mum-to-be. You might argue that a gay man would be less likely to have descendants—but what if he was destined to save a life?

And adding a modern-day man to the historical mix could have just as serious consequences. There would have to be a strong temptation to meddle—could you have stood by and let Franz Ferdinand be assassinated, even though it would cause World War One and untold death and misery, without at least trying to warn him? Even if our man out of time was a model of restraint, his very presence would affect things. Might he take the last seat on the bus, and prevent another man meeting the woman he would have married, leading to children never having been born? The possibilities are endless.

So how did I solve the problem for Trick of Time? Ah, well, you’ll have to read the book to find out! ;)

And when you’ve done that, have a good long think about the nature of causality when applied to time travel. Because it’s not quite as simple as it at first appears to my narrator, Ted....

Giveaway question: If you could travel back in time, when would you choose? And would you try and change history while you were there? ;)

I’m offering a free ebook of winner’s choice from my backlist to one lucky commenter on this post. The draw will be open until noonish on Thursday 31st January (GMT).

A lover from another time

When Ted Ennis steps out the doors of the Criterion Theatre for a cigarette and finds himself in Victorian London, he begins to doubt his sanity. At first he thinks it's all a film set, and is sure that the strikingly handsome young man leaning against a lamppost must be the leading man…

What starts as a sordid transaction with a beautiful rent boy quickly turns into something much deeper, drawing him back again and again as he gets to know Jem and craves meaningful encounters with him.

But Ted doesn't understand the exact conditions necessary for his trips through time—and for Jem, time may actually be running out. Now Ted has one last shot to get back to Jem and save their relationship, before it's too late…

JL Merrow is that rare beast, an English person who refuses to drink tea.  She read Natural Sciences at Cambridge, where she learned many things, chief amongst which was that she never wanted to see the inside of a lab ever again.  Her one regret is that she never mastered the ability of punting one-handed whilst holding a glass of champagne.

She writes across genres, with a preference for contemporary gay romance and the paranormal, and is frequently accused of humour.  Her novella Muscling Through is a 2013 EPIC ebook Award finalist.

JL Merrow is a member of the UK GLBTQ Fiction Meet organising team.